Efficiency in the demand and supply model has the same basic meaning: The economy is getting as much benefit as possible from its scarce resources and all the possible gains from trade have been achieved. In other words, the optimal amount of each good and service is being produced and consumed.

For example, point \(J\) shows that if the price was \(\$90\), \(20\) million tablets would be sold. Those consumers who would have been willing to pay \(\$90\) for a tablet based on the utility they expect to receive from it, but who were able to pay the equilibrium price of \(\$80\), clearly received a benefit beyond what they had to pay for. Remember, the demand curve traces consumers’ willingness to pay for different quantities. The amount that individuals would have been willing to pay, minus the amount that they actually paid, is called consumer surplus. Consumer surplus is the area labeled \(F\)—that is, the area above the market price and below the demand curve. 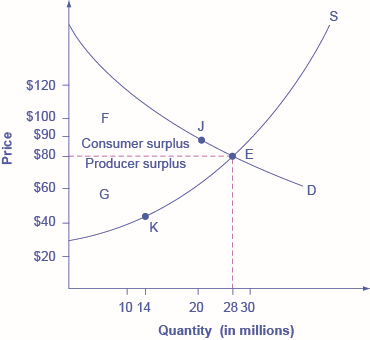 The supply curve shows the quantity that firms are willing to supply at each price. For example, point \(K\) in Figure \(\PageIndex{1}\) illustrates that, at \(\$45\), firms would still have been willing to supply a quantity of \(14\) million. Those producers who would have been willing to supply the tablets at \(\$45\), but who were instead able to charge the equilibrium price of \(\$80\), clearly received an extra benefit beyond what they required to supply the product. The amount that a seller is paid for a good minus the seller’s actual cost is called producer surplus. In Figure \(\PageIndex{1}\), producer surplus is the area labeled \(G\)—that is, the area between the market price and the segment of the supply curve below the equilibrium.

The imposition of a price floor or a price ceiling will prevent a market from adjusting to its equilibrium price and quantity, and thus will create an inefficient outcome. But there is an additional twist here. Along with creating inefficiency, price floors and ceilings will also transfer some consumer surplus to producers, or some producer surplus to consumers.

Imagine that several firms develop a promising but expensive new drug for treating back pain. If this therapy is left to the market, the equilibrium price will be \(\$600\) per month and \(20,000\) people will use the drug, as shown in Figure \(\PageIndex{2}\) (a). The original level of consumer surplus is \(T + U\) and producer surplus is \(V + W + X\). However, the government decides to impose a price ceiling of \(\$400\) to make the drug more affordable. At this price ceiling, firms in the market now produce only \(15,000\).

As a result, two changes occur. First, an inefficient outcome occurs and the total surplus of society is reduced. The loss in social surplus that occurs when the economy produces at an inefficient quantity is called deadweight loss. In a very real sense, it is like money thrown away that benefits no one. In Figure \(\PageIndex{2}\) (a), the deadweight loss is the area \(U + W\). When deadweight loss exists, it is possible for both consumer and producer surplus to be higher, in this case because the price control is blocking some suppliers and demanders from transactions they would both be willing to make.

Efficiency and Price Floors and Ceilings

This analysis shows that a price ceiling, like a law establishing rent controls, will transfer some producer surplus to consumers—which helps to explain why consumers often favor them. Conversely, a price floor like a guarantee that farmers will receive a certain price for their crops will transfer some consumer surplus to producers, which explains why producers often favor them. However, both price floors and price ceilings block some transactions that buyers and sellers would have been willing to make, and creates deadweight loss. Removing such barriers, so that prices and quantities can adjust to their equilibrium level, will increase the economy’s social surplus.

Demand and Supply as a Social Adjustment Mechanism

The demand and supply model emphasizes that prices are not set only by demand or only by supply, but by the interaction between the two. In 1890, the famous economist Alfred Marshall wrote that asking whether supply or demand determined a price was like arguing “whether it is the upper or the under blade of a pair of scissors that cuts a piece of paper.” The answer is that both blades of the demand and supply scissors are always involved.

The adjustments of equilibrium price and quantity in a market-oriented economy often occur without much government direction or oversight. If the coffee crop in Brazil suffers a terrible frost, then the supply curve of coffee shifts to the left and the price of coffee rises. Some people—call them the coffee addicts—continue to drink coffee and pay the higher price. Others switch to tea or soft drinks. No government commission is needed to figure out how to adjust coffee prices, which companies will be allowed to process the remaining supply, which supermarkets in which cities will get how much coffee to sell, or which consumers will ultimately be allowed to drink the brew. Such adjustments in response to price changes happen all the time in a market economy, often so smoothly and rapidly that we barely notice them.

Think for a moment of all the seasonal foods that are available and inexpensive at certain times of the year, like fresh corn in midsummer, but more expensive at other times of the year. People alter their diets and restaurants alter their menus in response to these fluctuations in prices without fuss or fanfare. For both the U.S. economy and the world economy as a whole, markets—that is, demand and supply—are the primary social mechanism for answering the basic questions about what is produced, how it is produced, and for whom it is produced.

Why Can We Not Get Enough of Organic?

Organic food is grown without synthetic pesticides, chemical fertilizers or genetically modified seeds. In recent decades, the demand for organic products has increased dramatically. The Organic Trade Association reported sales increased from \(\$1\) billion in 1990 to \(\$35.1\) billion in 2013, more than \(90\%\) of which were sales of food products.

Why, then, are organic foods more expensive than their conventional counterparts? The answer is a clear application of the theories of supply and demand. As people have learned more about the harmful effects of chemical fertilizers, growth hormones, pesticides and the like from large-scale factory farming, our tastes and preferences for safer, organic foods have increased. This change in tastes has been reinforced by increases in income, which allow people to purchase pricier products, and has made organic foods more mainstream. This has led to an increased demand for organic foods. Graphically, the demand curve has shifted right, and we have moved up the supply curve as producers have responded to the higher prices by supplying a greater quantity.

In addition to the movement along the supply curve, we have also had an increase in the number of farmers converting to organic farming over time. This is represented by a shift to the right of the supply curve. Since both demand and supply have shifted to the right, the resulting equilibrium quantity of organic foods is definitely higher, but the price will only fall when the increase in supply is larger than the increase in demand. We may need more time before we see lower prices in organic foods. Since the production costs of these foods may remain higher than conventional farming, because organic fertilizers and pest management techniques are more expensive, they may never fully catch up with the lower prices of non-organic foods.

As a final, specific example: The Environmental Working Group’s “Dirty Dozen” list of fruits and vegetables, which test high for pesticide residue even after washing, was released in April 2013. The inclusion of strawberries on the list has led to an increase in demand for organic strawberries, resulting in both a higher equilibrium price and quantity of sales.

consumer surplus
the extra benefit consumers receive from buying a good or service, measured by what the individuals would have been willing to pay minus the amount that they actually paid

social surplus
the sum of consumer surplus and producer surplus