A larger capacitor value is fine to use in this experiment, so long as its working voltage is high enough. To be safe, choose a capacitor with a working voltage rating at least twice the RMS AC voltage output of the low-voltage AC power supply.

High-wattage 12-volt lamps may be purchased from a recreational vehicle (RV) and boating supply store. Common sizes are 25 watts and 50 watts. This lamp will be used as a “heavy” load for the power supply. This experiment involves constructing a rectifier and filter circuit for attachment to the low-voltage AC power supply constructed earlier. With this device, you will have a source of low-voltage, DC power suitable as a replacement for a battery in battery-powered experiments. If you would like to make this device its own, self-contained 120VAC/DC power supply, you may add all the componentry of the low-voltage AC supply to the “AC in” side of this circuit: a transformer, power cord, and plug. Even if you don’t choose to do this, I recommend using a metal box larger than necessary to provide room for additional voltage regulation circuitry you might choose to add to this project later.

The bridge rectifier unit should be rated for a current at least as high as the transformer’s secondary winding is rated for, and for a voltage at least twice as high as the RMS voltage of the transformer’s output (this allows for peak voltage, plus an additional safety margin). The Radio Shack rectifier specified in the parts list is rated for 25 amps and 50 volts, more than enough for the output of the low-voltage AC power supply specified in the AC experiments chapter.

Rectifier units of this size are often equipped with “quick-disconnect” terminals. Complimentary “quick-disconnect” lugs are sold that crimp onto the bare ends of a wire. This is the preferred method of terminal connection. You may solder wires directly to the lugs of the rectifier, but I recommend against direct soldering to any semiconductor component for two reasons: possible heat damage during soldering, and difficulty of replacing the component in the event of failure.

Semiconductor devices are more prone to failure than most of the components covered in these experiments thus far, and so if you have any intention of making a circuit permanent, you should build it to be maintained. “Maintainable construction” involves, among other things, making all delicate components replaceable. It also means making “test points” accessible to meter probes throughout the circuit, so that troubleshooting may be executed with a minimum of inconvenience. Terminal strips inherently provide test points for taking voltage measurements, and they also allow for easy disconnection of wires without sacrificing connection durability.

Bolt the rectifier unit to the inside of the metal box. The box’s surface area will act as a radiator, keeping the rectifier unit cool as it passes high currents. Any metal radiator surface designed to lower the operating temperature of an electronic component is called a heat sink. Semiconductor devices, in general, are prone to damage from overheating, so providing a path for heat transfer from the device(s) to the ambient air is very important when the circuit in question may handle large amounts of power.

A capacitor is included in the circuit to act as a filter to reduce ripple voltage. Make sure that you connect the capacitor properly across the DC output terminals of the rectifier so that the polarities match. Being an electrolytic capacitor, it is sensitive to damage by polarity reversal. In this circuit especially, where the internal resistance of the transformer and rectifier are low and the short-circuit current consequently is high, the potential for damage is great. Warning: a failed capacitor in this circuit will likely explode with alarming force!

After the rectifier/filter circuit is built, connect it to the low-voltage AC power supply like this: 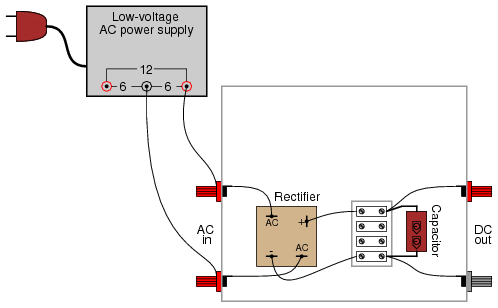 Measure the AC voltage output by the low-voltage power supply. Your meter should indicate approximately 6 volts if the circuit is connected as shown. This voltage measurement is the RMS voltage of the AC power supply.

Now, switch your multimeter to the DC voltage function and measure the DC voltage output by the rectifier/filter circuit. It should read substantially higher than the RMS voltage of the AC input measured before. The filtering action of the capacitor provides a DC output voltage equal to the peak AC voltage, hence the greater voltage indication: 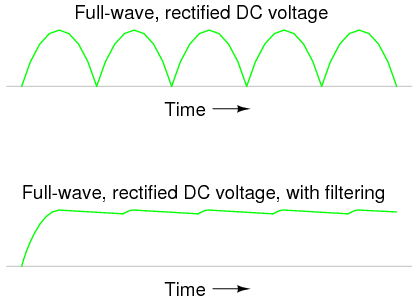 Measure the AC ripple voltage magnitude with a digital voltmeter set to AC volts (or AC millivolts). You should notice a much smaller ripple voltage in this circuit than what was measured in any of the unfiltered rectifier circuits previously built. Feel free to use your audio detector to “listen” to the AC ripple voltage output by the rectifier/filter unit. As usual, connect a small “coupling” capacitor in series with the detector so that it does not respond to the DC voltage, but only the AC ripple. Very little sound should be heard.

After taking unloaded AC ripple voltage measurements, connect the 25 watt light bulb to the output of the rectifier/filter circuit like this: Re-measure the ripple voltage present between the rectifier/filter unit’s “DC out” terminals. With a heavy load, the filter capacitor becomes discharged between rectified voltage peaks, resulting in greater ripple than before:

If less ripple is desired under heavy-load conditions, a larger capacitor may be used, or a more complex filter circuit may be built using two capacitors and an inductor:

If you choose to build such a filter circuit, be sure to use an iron-core inductor for maximum inductance, and one with thick enough wire to safely handle the full rated current of power supply. Inductors used for the purpose of filtering are sometimes referred to as chokes because they “choke” AC ripple voltage from getting to the load. If a suitable choke cannot be obtained, the secondary winding of a step-down power transformer like the type used to step 120 volts AC down to 12 or 6 volts AC in the low-voltage power supply may be used. Leave the primary (120 volts) winding open:

You may decrease the value of Rload in the simulation from 10 kΩ to some lower value to explore the effects of loading on ripple voltage. As it is with a 10 kΩ load resistor, the ripple is undetectable on the waveform plotted by SPICE.