As an example of using several circuits together, we are going to make a device that will have 16 inputs, representing a four digit number, to a four digit 7-segment display but using just one binary-to-7-segment encoder. First, the overall architecture of our circuit provides what looks like our the description provided. 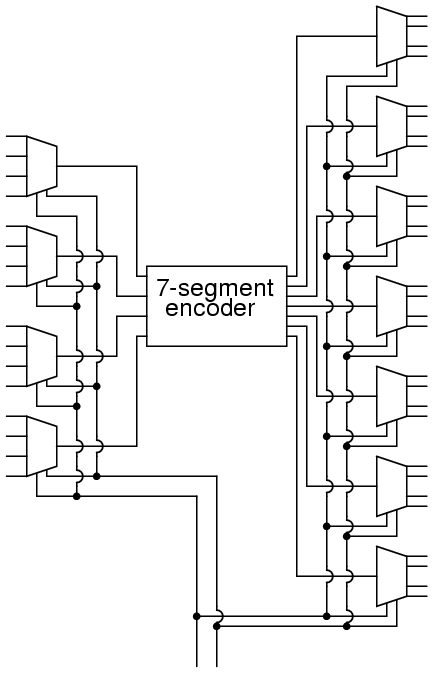 Follow this circuit through and you can confirm that it matches the description given above. There are 16 primary inputs. There are two more inputs used to select which digit will be displayed. There are 28 outputs to control the four digit 7-segment display. Only four of the primary inputs are encoded at a time. You may have noticed a potential question though.

Let’s get a perspective on just how complex this circuit is by looking at the equivalent ladder logic. Notice how quickly this large circuit was developed from smaller parts. This is true of most complex circuits: they are composed of smaller parts allowing a designer to abstract away some complexity and understand the circuit as a whole. Sometimes a designer can even take components that others have designed and remove the detail design work.

In addition to the added quantity of gates, this design suffers from one additional weakness. You can only see one display one digit at a time. If there was some way to rotate through the four digits quickly, you could have the appearance of all four digits being displayed at the same time. That is a job for a sequential circuit, which is the subject of the next several chapters.