Computer hardware (usually simply called hardware when a computing context is concerned) is the collection of physical elements that constitutes a computer system. Computer hardware is the physical parts or components of a computer, such as the monitor, mouse, keyboard, computer data storage, hard disk drive (HDD), graphic cards, sound cards, memory, motherboard, and so on, all of which are physical objects that are tangible.

The motherboard is the main component of a computer. It is a large rectangular board with integrated circuitry that connects the other parts of the computer including the CPU, the RAM, the disk drives (CD, DVD, hard disk, or any others) as well as any peripherals connected via the ports or the expansion slots.

Components directly attached to or part of the motherboard include:

Computer data storage, often called storage, refers to computer components and recording media that retain digital data. Data storage is a core function and fundamental component of computers. The price of solid-state drives (SSD), which store data on flash memory, has dropped a lot in recent years, making them a better choice than ever to add to a computer to make booting up and accessing files faster.

Data is stored by a computer using a variety of media. Hard disk drives are found in virtually all older computers, due to their high capacity and low cost, but solid-state drives are faster and more power efficient, although currently more expensive than hard drives, so are often found in more expensive computers. Some systems may use a disk array controller for greater performance or reliability.

To transfer data between computers, a USB flash drive or Optical disc may be used. Their usefulness depends on being readable by other systems; the majority of machines have an optical disk drive, and virtually all have a USB port. 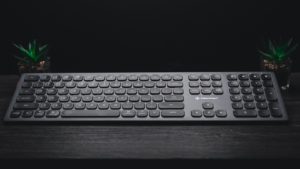 Input and output devices are typically housed externally to the main computer chassis. The following are either standard or very common to many computer systems.

Input devices allow the user to enter information into the system, or control its operation. Most personal computers have a mouse and keyboard, but laptop systems typically use a touchpad instead of a mouse. Other input devices include webcams, microphones, joysticks, and image scanners.

Output devices display information in a human readable form. Such devices could include printers, speakers, monitors or a Braille embosser.