There are several terms that are commonly used in discussions about and instructions for computer use. This guide will define these common terms to help you read instructions.

Desktop refers to the main screen of the computer. It is the first screen you see after logging in. The desktop’s appearance can vary widely because it is highly customizable, but generally desktops will feature a large image, icons, and a taskbar (covered later on this page).

A window is a viewing area that graphically displays a program so that the user can interact with it. A window is adjustable, so it can take up the entire screen or just part of the screen. Note that this is a different term from the Windows operating system—Macs also have windows.

The look of windows varies by operating system and program. Not every program’s window will function the same. For example, many programs open in full screen by default, so you will not see any of the window’s toolbars or buttons. Most windows have the same features, which we will cover here. 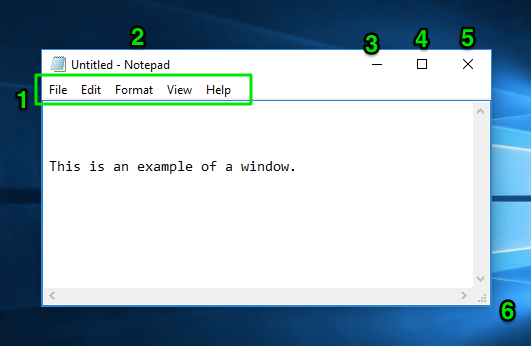 Diagram of a Windows 10 window.

Resizing windows can help you see multiple windows at once, as shown below. Clicking an option on the menu bar, such as File, opens a dialog menu that gives you more options to interact with the program. A window with a dialog menu.

Instructions in this course—and elsewhere—will often use shorthand to indicate how to get to a particular command through dialog menus. This shorthand separates phrases that should be clicked with a > symbol. For example, the instructions for the screenshot above would be “File>Save.”

The taskbar runs at one edge of the screen, almost always the bottom. The taskbar is used to access the Start menu and currently running programs. Like the desktop, it is very customizable.

Note that Macs do not have a taskbar, but they do have a similar feature called the Dock.

The taskbar can be very useful for multitasking. By clicking between the icons of two open windows on the taskbar, you can work in two different documents or programs at once. Move your mouse over an icon to have a preview of the other window, then click on it to switch.