Note that you have already completed steps 1 to 3 and even part of step 7! We have stopped short only of the steps that actually cost money. In this chapter we will look at what those costs are and how to manage them in a spreadsheet.

Where Are We in the Life Cycle?

Many information systems projects are conceived of in a life cycle that progresses in stages from analysis to implementation. The diagram below shows the stages that we touch in the current chapter: 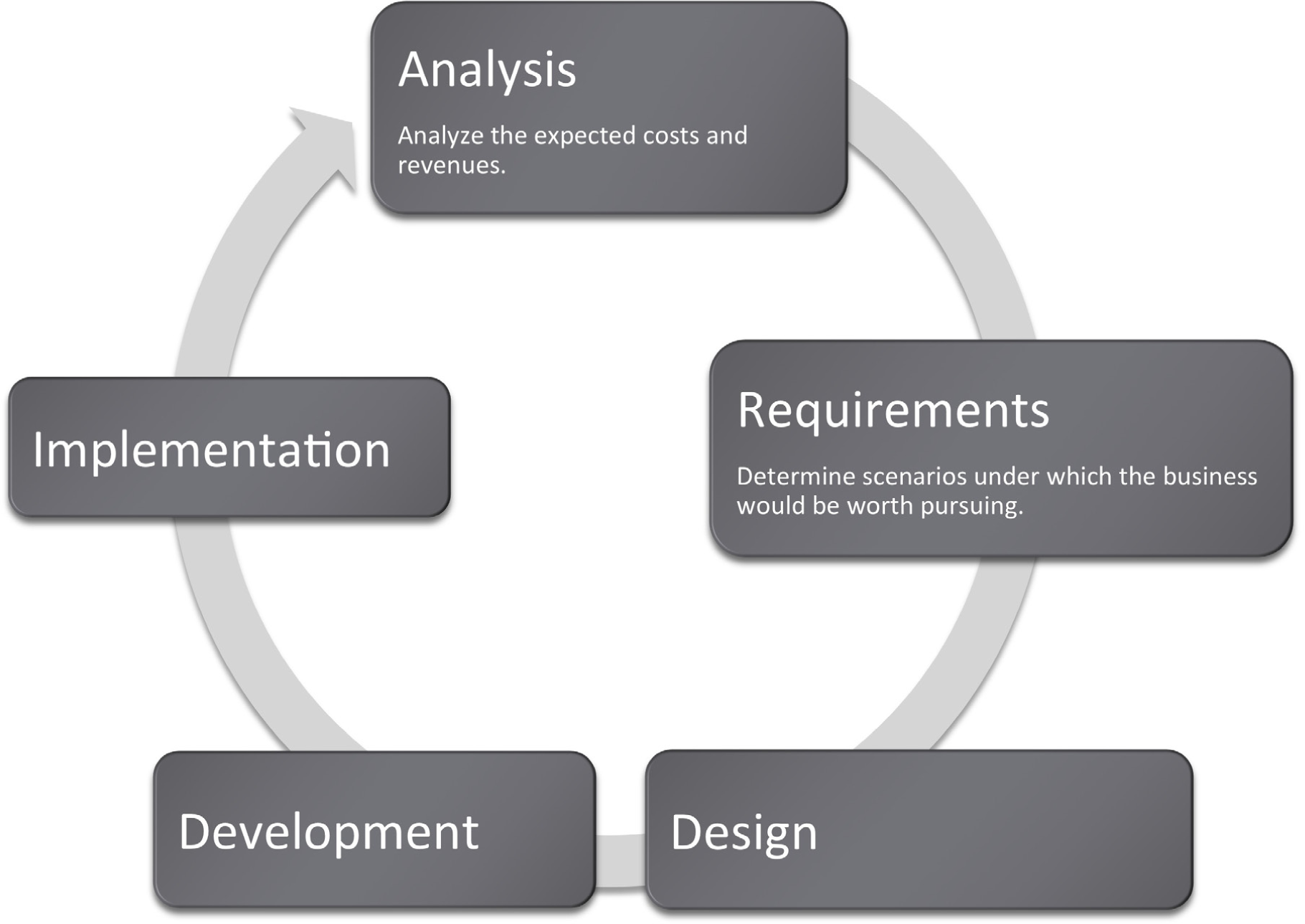 IS Professionals Serve the Role of Intermediary

To actually program an iPhone app requires fairly extensive programming knowledge. Apps are programmed in a language called objective C. This is beyond the scope of most information systems (IS) business analysts. IS professionals hire the programmers, rather than doing the coding themselves. In fact, most IS curricula teach programming only so that the business analyst is able to communicate effectively with programmers by speaking a bit of their language and understanding some of their constraints.

Within a large corporation there will typically be a team of developers (usually computer science majors) and a team of business analysts (usually IS majors). The business analysts communicate with the business units, such as marketing or finance, to analyze the business needs. They then translate those needs into requirements that are delivered to the developers. The process flows, mockups, and market descriptions that you have done in earlier chapters are all part of those requirements.

The business analyst’s job continues even after the app is developed. They test the app extensively when it is delivered back from the developer.

Most of the iPhone apps with which you are familiar are designed for the consumer market. However, there are a number of corporations that design in-house proprietary iPhone apps for their employees. If you were designing your app for a company you would serve as the intermediary between the business unit and the developers. 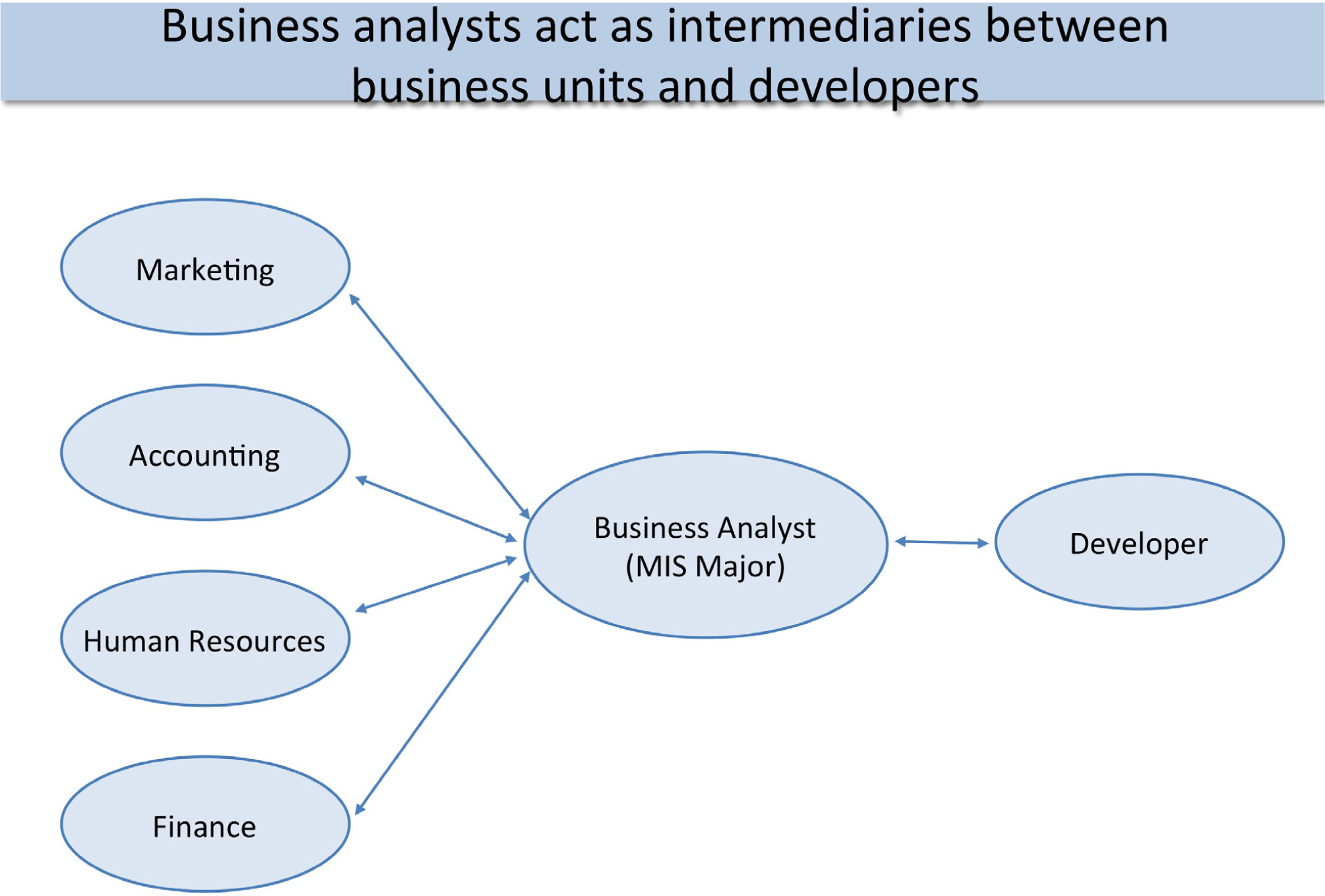 IS professionals typically serve in the role of a business analyst. They find out the requirements of the business unit and then translate those requirements into documentation that the programmers can work with.

Some corporations, especially small ones, do not retain a team of developers. They rely on the ability to contract out development work.

With the advent of the web, the process of locating programmers has become much easier. There are a number of portals such as Elance.com that allow you to auction off your job much the same way that you would auction a product on eBay. Developers then bid on your job and you select your preferred developer. To help you in the decision, these services also maintain ratings of developers based on feedback from prior clients.

One key factor in outsourcing is communicating clearly with the developer. Any documentation that you prepare in advance helps reduce the possibility of misunderstandings. That is why we spent time planning the app and constructing a mockup.

Choosing a developer is not about getting the lowest price, but rather about getting the best value. You want a good developer, but maybe you do not need the best. Make sure that your developer has a reputation for delivering on time and within budget. Furthermore, you often get what you pay for. Cheaper developers may deliver lower quality.

There is a myth of developers in third world countries working practically for free. However, as countries such as India, Pakistan, and Russia become wealthier, the wages rise.

The offshoring process is imperfect and some U.S. companies have found that documentation requirements are so extensive, and communication problems so prevalent, that it is almost cheaper in the end to hire a local programmer somewhat familiar with the business already. Some portals, such as iPhoneAppQuotes.com, advertise on-shoring as their competitive advantage.

Many companies provide iPhone quotes. Elance.com is more general and worldwide, developing lots of different kinds of systems with developers all over the world. iPhoneAppQuotes.com develops iPhone apps using only developers in the United States.

Sometimes students resist the process of estimating costs since there is so much uncertainty in the variables. Uncertainty is normal in business and is accepted by investors. The solution is to proceed with good faith estimates and perhaps produce a range of possible outcomes dependent on positive and negative scenarios.

Below you will find a summary of the costs involved in creating an iPhone app. Note that we are not including the value of your time to conceive, document, and test the app. Like many entrepreneurs you will be working for free.

Legal costs: If your business has a name other than your own, then by law you must file for a Doing Business As (DBA) license. However, that license does not protect you from liability. You are still personally liable for the debts of your business. A safer but more expensive option is to set up a Limited Liability Corporation (LLC). The LLC offers some protection from personal liability. We are picking relatively inexpensive options though you may want to add the cost of an attorney to your estimates.

Developer costs: Your greatest cost will be to pay the developer. Avoid being too cheap here or the entire project will fail. To register and test your app with iTunes requires that you have an Apple Developer license. So even though you are not the developer, still you need to register as an Apple developer.

Marketing costs: Finally, you need to promote your app. You have already created a web site to which you can direct traffic. But ultimately people have to find out about you. App review sites such as AppVee.com offer advertising packages for around $200/month.

All of the above are fixed costs. You have to pay them whether you sell one app or 10,000. However, you also have a variable cost from Apple. Apple takes 30% of every sale on iTunes. This is for the privilege of selling your app in their store. Since they are the only store allowed to sell apps, you do not really have a choice. So if your app costs $2.00, Apple gets $0.60 for each app sold. You make $1.40 per sale.

Some costs of doing business shown above. Legalzoom.com is one of the less expensive ways to incorporate.

The concept of variable costs is essential to predicting profitability. Put quite simply, you do not make any money unless you sell a lot of apps. Therefore, we will spend some effort trying to understand variable costs both conceptually and in a spreadsheet.